Permaculture Politics: From Competition to Co-Operation

When I discovered Permaculture, I found more than knowledge and skill, I met my community. Over the years, as I have tried to make a living doing the only thing that makes sense to me, I have found currents of self-righteousness and competition in what is now considered an industry. The ethics and principles that had drawn me to make Permaculture my purpose, were not always being practiced.
To have an impact environmentally, we must look at our social patterns and conditioning. As the movement grows, I am relieved to witness a generation of people willing to discuss, share, and admit they don’t in fact, know everything.
There is a symbiosis of nutrient exchange and co-operation exercised in these systems that enables the forest to continue cycling in a self-fulfilling and efficient manner, with no waste.
If permaculture aims to mimic nature effectively, we must change our individualised compete and segregate mind-sets to that of co-operation and integration. The politics of permaculture have had the ability to veer far from its very own principles and practices, causing rifts within an industry based on culture and community.
I thought this analogy quite lovely, and very fitting in my experience.
So I thank those pioneers for the rich soil they have created, and the hard work done photosynthesizing in a harsh environment.
The next succession species is a little more fleshy, diverse and palatable, nursing the surrounding conditions for saplings to take hold and grow tall into the canopy.

If progress is to be achieved in the movement of permaculture, regenerative living, and earth renewal, then we must begin to act like a forest system – constantly exchanging, sharing, and cooperating to achieve a state of symbiosis.

During the first Permaculture Design Course (PDC) I participated in, I was met with much more than just practical knowledge, design skill, environmental inspiration and strategies for action - I met my community.
The beauty of a two week permaculture immersion is the sense of close family that develops over such a short period of time.

Each time I have taken a PDC or Diploma, Advanced Course etc., I have been blown away by the sheer diversity of people that come together for one thing: love of the environment and its inhabitants. I have witnessed men that work in the corporate sector work alongside vegan gutter-punks to create compost. I have seen people of all races, sexualities, religions, beliefs and lifestyles work together to follow the same set of ethics and values.

This is one of the things that inspired me to follow and practice permaculture.

Permaculture is based on systems thinking  using ecosystems to gain insight into the workings of the natural world, so we may then apply these strategies to our own systems - whether they be landscape, social, economical, or otherwise.

My Permaculture journey has not always been met with such free-flowing acceptance, love and understanding. Upon my introduction to permaculture I was made painfully aware that the two co-founders of the concept, Bill Mollison and David Holmgren, do not get along. This struck me as odd, as one of the main messages I receive from permaculture is the need for community. Over time, this need has become ever more prominent in my mind, as I see that to truly become regenerative as a species, we cannot carry our individualised Western mindsets into the future if we are to be self-sufficient - it is in fact, unsustainable.

I thought it ironic that the people that worked on a methodology based on systems thinking, with a firm understanding of the balance between interspecies communities, could not themselves work towards a future of communication.

This is not a criticism of those as individuals; it is more an observation that this has been the foundation of permaculture, and I have often wondered what that has meant for its evolution.
I have witnessed people within - what is now called ‘a movement’ - gossip in regards to the reasoning behind the founder’s disengagement, and I have even been asked (multiple times) whether I am in the 'Bill or David Camp'. If I am to be completely honest with my readers, this question utterly disgusts me. To ask this is to go against all I believe permaculture stands for, and I feel if we carry these ways of thinking, this idea of segregation, into the future, we really have no hope of environmental repair. Because we are part of ecology, and if we cannot repair our social structures, and the individual mindsets that create them, we will see no true progress.

Miles Olson, author of 'Unlearn, Rewild' states in a podcast hosted by Ayana Young: "Imagine that suddenly the wheels of the system grind to a halt, completely stopped. Well, there was a time that I thought 'Yes, thats exactly what we need, thats the answer!’ I’m quite convinced, and I don't know if anyone could convince me otherwise, that I think a truer analysis of what would happen in such a case of collapse or a revolution, is that by noon of the day after the revolution, everyone would be all back at work, in the same repressive patterns building the same structures unconsciously. Because what really builds the oppressive structures that we are surrounded by, is a programming that is internalized, its all stuff we carry with us internally."

As such we must move away from certain modalities of thought in order to progress with this movement of permaculture, regenerative living, environmental justice and Earth renewal.
I am in neither camp and I never will be. There are people’s work which greatly inspire and influence me, but I do not compare the apple tree to the raspberry cane in a food forest. Comparison will be the downfall of this species Which brings me to my next point: Ego must be redefined in Permaculture if we are going to progress with the ideas and ethics it presents.

As I delved deeper into this movement, and it became my scene, my home, my family, friends, colleagues and peers, I was exposed to an astounding amount of comparison, criticism and righteousness. In some cases I saw a competition mentality, people not exchanging knowledge and ideas like a forest does nutrients, but arguing and debating points. Ironically most of this knowledge was not battled from personal experience, but from books written by other pioneers, and then used as ammunition.
I would see the subtle scoffs and scowls as some younger generation earth stewards would state opinions, ask questions, or try and create a business within the industry. Some pioneers puffed up like pigeons, others guarded their turf with the fierceness of a flock of magpies. Gossip of who was doing what slicked the rippling movement like an oil spill, disabling the next generations from even taking a breath.
The permaculture principle of 'co-operation not competition' was not being embodied.
I felt the social conditioning of our culture was ever prevalent, and we must remind ourselves that culture is what has enabled the indigenous peoples - whom permaculture has developed its principles from - to live in such a balance with the natural world around them.  To practice PermaCulture, we must create stable, resilient social systems and structures, and embody a culture of change.

I must say that I have not only encountered the rigid mentalities discussed. I have also experienced great warmth, support and empowerment.
Now, I am being exposed to a new generation of Permaculturists, and the more farms, courses, talks and events I attend with a density of younger enthusiasts, the more hope I have for changing the trajectory of the industry.

People sit with their cups of nettle tea discussing different ideologies, scientific views and theories, techniques and belief systems, keen and interested in communication with their fellow Naturalists.
These people have witnessed the common burn-out that permaculture pioneers have experienced, and instead wish to find a niche, and let others fill the gaps of succession around them, in a mutual exchange which benefits the whole.
Like a mycelial network, I see practitioners inviting people on board to projects, have less reliance and focus on intellectual and financial capital, and more on social, experiential and cultural capital.

When I co-facilitate our PDCs, I run an exercise on the ‘8 Forms of Capital’, and as it turns out, cultural capital is what people in our society are lacking.  Considering our racial diversity and history of attempted indigenous genocide, this makes sense. If we are to reformat our society into an interconnected fabric of resilience within community, our self-righteousness, ego and pride will need to be fuelled with awareness and regulation.
We need to create a welcoming, understanding and inclusive atmosphere to involve and empower people of all creeds, beliefs and scenes. If this movement is to move beyond a niche, if we are to finally move beyond "is that like horticulture?", we will need to include people of all streams to formulate the river of potential possibilities.
A senior Permaculturist explained it beautifully when asked about the politics and attitudes expressed within the movement. He stated that the pioneer species within permaculture were just the same as those of a land-based system - they were prickly, harsh, and grew in a disturbed environment ready to create more optimal conditions for the next generation. Although they were protecting and nurturing the soil for the next generation to grow in, the very thing that made them pioneers was the very same reason they had trouble getting along with others - they were thorny, spikey, rough and tough!
Hopefully, with the right mindset, and the application of permaculture’s principles in all facets, those late succession species will shade out and make obsolete the current system, fostering both ecological and economic growth, providing enough fruit for generations to come. 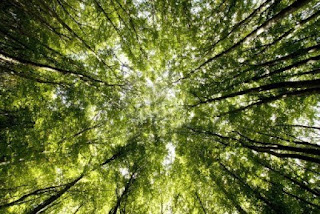 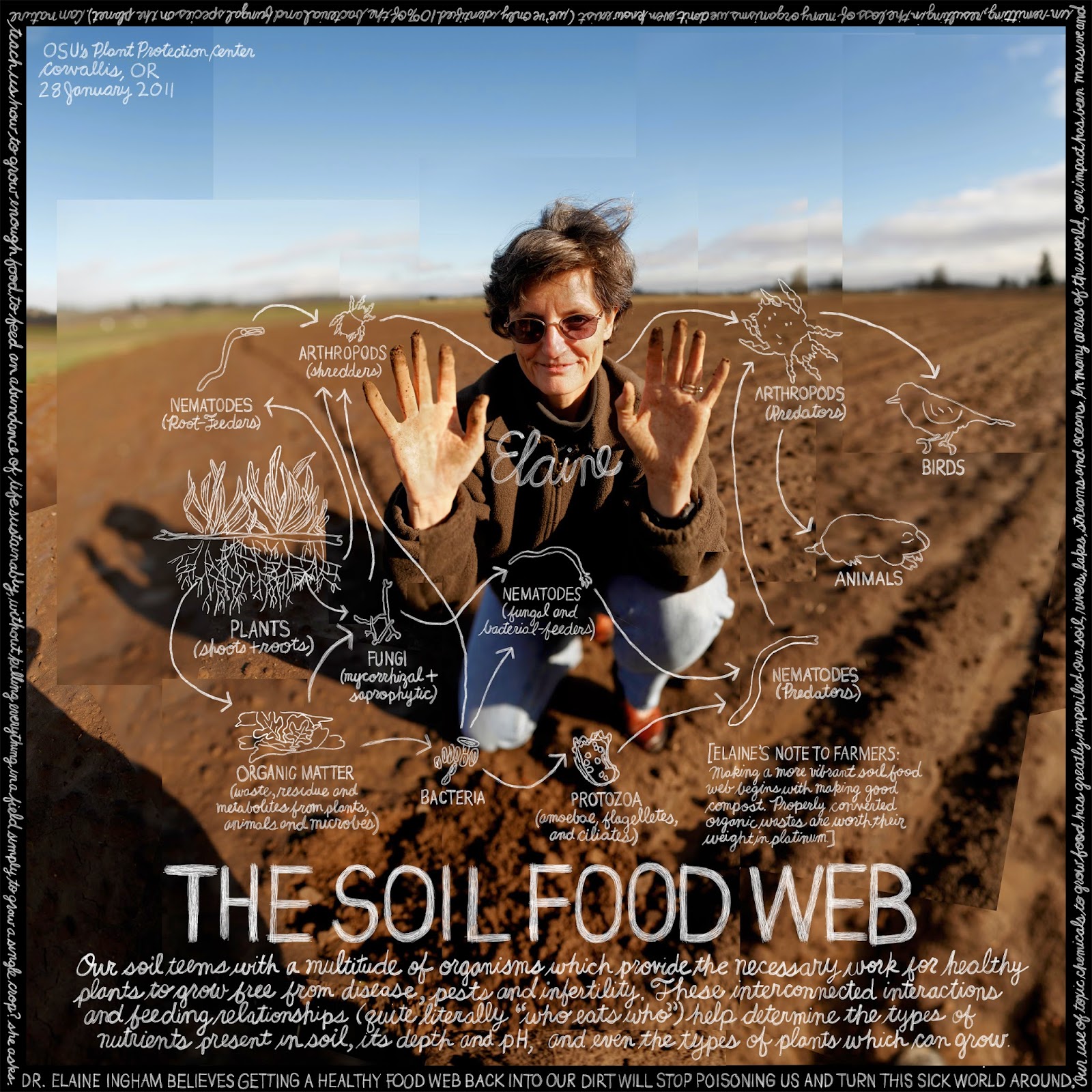 'Unlock the Secrets of Soil' with Dr.Elaine Ingham